The Earth´s global temperature has no mean value. Glaciers in the western part of Norway started to grow 500 B.C. The ice extent had a maximum temperature at the year 1755 A.D. [1], when the Greenland temperature had the coldest period in 4000 years. The cold period, known as “The Little Ice Age”, covers the period from approximately 1200 to 1850 A.D. The global modern warming temperature from 1850 to 2020 thus represents a temporary recovery period after “The Little Ice Age”.

The origin of the global temperature variations has been discussed for more the hundred years. Some fundamental research questions are:

The answers are hidden in the data series. All data series have a unique signature, which reveals the source of variations. If the source has deterministic variation, we can compute upcoming events.

Figure 2. The computed wavelet spectrum of Earth’s global mean temperature from 1850 to 2020.

where x(t) is the global temperature data series and Y() is a coif3 wavelet impulse function. The computed wavelets represent moving correlations between the data series x(t) and the scaled wavelet functions Y(), where the parameter a represents scaling period and b represents the scaling start position.

Climate Signature from the Moon

Mutual Earth-Moon-Sun (EMS) gravitation causes a spectrum of stationary tide periods in the Earth’s oceans. The period 18.61 is related to the 18.61-year nutation of the Earth’s axis (i.e., the Earth’s nutation causes a global 18.61-year tide between the poles and equator). Stationary long-period tides introduce vertical temperature mixing between warm surface temperatures and cold bottom temperatures, and thus, heat is redistributed throughout the large-scale oceanic thermohaline system. The lunar nodal tide signature in the global temperature spectrum reveals the lunar nodal tide as the source of global temperature variations.

The source of climate variations

Picture of the day 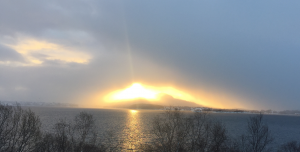